Jane Dismore is a freelance writer of history and heritage and a biographer. She is a Fellow of the Royal Historical Society (FRHistS) and a member of the Historical Writers’ Association (HWA), the Biographers’ Club, the Biographers’ International Organisation (BIO), the Society of Authors and, as a solicitor (now non-practising), the Law Society of England and Wales.  Jane is also an experienced public speaker and has presented on radio and popped up in podcasts and on TV.  Her literary agent is Andrew Lownie (for Duchesses and Princess).

A list of Jane’s most recent published features can be found further down this page.

NEWS  Jane is honoured to be elected (May 2022) a Fellow of the Royal Historical Society ‘in recognition of [her] contribution to historical scholarship’.

NEWS  Jane’s latest book is now out:  TANGLED SOULS : Love and Scandal among the Victorian Aristocracy (pub. The History Press, 17 Feb. 2022). Available from all good bookshops or you can order here:  https://smarturl.it/TangledSouls

Sample reviews: ‘An exciting page-turner of a book’ (The Lady magazine); ‘I genuinely could not put it down’ (Roger Bolton, Radio 4 presenter & author);  ‘Very well researched and so fascinating.  A fabulous read’. (Karen D. via Facebook). Link to more reviews HERE: https://janedismore.com/reviews/

US author Allegra Huston writes about Tangled Souls in The Oldie magazine (May 2022) and how it helped her understand her English great-grandfather, Harry Cust, at the heart of the book. (See Reviews page.)

See Events page for details and links to radio interviews on Tangled Souls, including with broadcaster and former politician Michael Portillo.

Jane’s feature on Tangled Souls is in the Feb. 2022 issue of Historia, the magazine of the Historical Writers’ Association (HWA)

NEWS  Jane is delighted to be the recipient of an Antonia Fraser Award (October 2021), a grant for a work-in-progress of a biography of a woman or women.  Her proposed subject is Lady Dorothy Mills (nee Walpole), an early 20th century traveller, writer and novelist and one of the first women Fellows of the Royal Geographic Society.  A link to an earlier feature Jane wrote for the Eastern Daily Press is found here: https://janedismore.com/2014/12/10/lady-dorothy-mills-nee-walpole/

Lady Antonia Fraser is one of our major historical biographers. She invited Jane to meet her in Nov. 2021 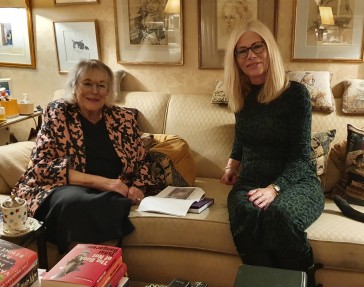 Update: Jane’s book, PRINCESS The Early Life of Queen Elizabeth II is now available in ebook and paperback by Lume Books (below left). It’s also still available (below right) from Lyons Press (an imprint of Rowman & Littlefield, USA). All editions available from the publishers or from Amazon.  (See sample reviews) 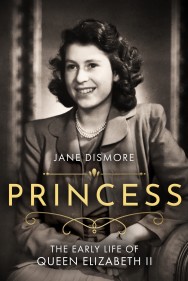 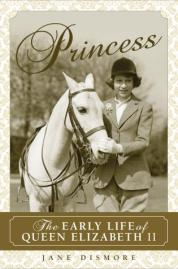 PRINCESS and filming: Jane was filmed for the documentary Our Queen in Wartime for which PRINCESS was a source, broadcast on ITV on 22 April 2020 (see Events page.) With the slightly different title of The Queen at War, it was also shown on 5 May 2020 on PBS.

DUCHESSES: Living in 21st Century Britain (published on 4th September 2014 by Blink  Books, an imprint of Bonnier Publishing.  Also available in an e-book) HM the Queen graciously accepted a copy of Duchesses for her 90th birthday.

When Kate Middleton was made a royal duchess in 2011, she made the old title topical, even desirable, again. Just below the royal duchesses on the aristocratic tree sits another tiny group of women with their dukes: the non-royal duchesses. They are just as much a part of Britain’s heritage, the dukedoms having been awarded by monarchs since the 16th century, but they are a dying breed.

Ten of these duchesses form the basis of this book. Not only is it the first time they have been featured together but in many cases it is the first time they have talked publicly about themselves. Each also selects a favourite duchess from the past, providing a fascinating gallery through the centuries and a comparison with today – for what does it mean to be a duchess in the 21st century when privilege is not a popular concept?

THE VOICE FROM THE GARDEN: Pamela Hambro and the Tale of Two Families Before and After the Great War (pub. Aug 2012, SilverWood Books)

LONGLISTED 2013 FOR THE NEW ANGLE PRIZE FOR LITERATURE

This true family saga focuses on two prominent families during a turbulent time in Britain’s history: the Hambros, a major merchant banking dynasty, and the Cobbolds, a long established British brewing family from Suffolk, who are united in 1919 by marriage. Their friends include the mighty Morgan banking family of the USA, and the prominent Swedish industrialists, the Wallenbergs, as well as members of the British aristocracy. At the heart of the action lies the love story of Pamela Cobbold and Charles Hambro.

BUYING JANE’S BOOKS: In these difficult times of Covid-19, if you have a problem buying any of Jane’s books from the publishers, you may be able to buy a copy from her direct. Please email her at betterprose@mail.com to enquire, saying which country you’re in.

PUBLISHED FEATURES & GUEST POSTS: some can be accessed from here; please click on title for link. (For some older features, see Links page and Archives):

Pictured at top of page: