Of Dukes, Soviets and Suffragists: the unexpected life of Ruth Cavendish-Bentinck

Ruth Cavendish-Bentinck was a most unlikely socialist and suffragist whose life reads like a Who’s Who of the late 19th/early 20th century.  Her close friends were diverse, from George Bernard Shaw and Keir Hardy, to the Duke of Argyll and Edward VII’s mistress, Alice Keppel. Her extensive collection of books, about and for women, formed the basis of the culturally-important Women’s Library, now part of the LSE. Ruth’s unusual parentage is also thought to have been an inspiration for Pygmalion.

Ruth was the notably beautiful great-great-granddaughter of the playwright Richard Brinsley Sheridan.  By marriage to Frederick Cavendish-Bentinck, from a family of dukes and other notables, she was related to Elizabeth Bowes Lyon (later Queen Elizabeth the Queen Mother), and today to Timothy Bentinck, 12thEarl of Portland, better known as David Archer in The Archers. Ruth was also the mother of both the 8th and 9th (the last) Dukes of Portland.

Most importantly – because it was of great significance to her life – she was one of two  illegitimate grandchildren of the 12th Duke of Somerset, Edward Adolphus St Maur (an affectation of the family name, Seymour), Lord of the Admiralty.   Ruth was born in Tangiers in October 1867 to the Duke’s eldest son and heir, Ferdinand, Earl St Maur, a foolhardy but brave mercenary, and a serving girl, Rosina Swan, daughter of a gipsy and an illiterate bricklayer. Ferdinand had met Rosina in a park and rescued her from a state of despair. Given her background she could not hope to become his duchess, so marriage was not an option.  However, she was very intelligent and Ferdy helped her improve her literacy and taught her French. He died young, his body racked by adventuring, followed by Rosina.

Ruth and her younger brother, Harold, were raised by their grandparents, the  Duke of Somerset and his wife Georgiana (known as ‘the Sheridan Duchess’), who were unfailingly kind to them. But despite an ancestry that included Jane Seymour, wife of Henry VIII and mother of the boy king, Edward VI, it could not rid Ruth and her brother of the stain of illegitimacy: she never forgot the reaction of many of the aristocracy.

She was educated at home by the Duke and conversed with notables like Disraeli.  Clever and rebellious, she was influenced by her great aunt, Caroline Norton, who had successfully campaigned for law reforms benefitting women. Ruth became an early member of the Fabian Society, writing an important pamphlet on aristocracy and socialism.  The Webbs were close friends, as were other members of Britain’s socialist intelligentsia; among the papers she left to the Women’s Library are letters between her and Shaw. It was he and her other socialist friends, to whom her illegitimacy was unimportant, whom Ruth regaled with stories of her unconventional parents, which echoed in Pygmalion.

Ruth became a member of the newly-formed Women’s Social and Political Union (WSPU). However, alarmed at its increasingly violent tactics under Emmeline Pankhurst, she left the group in 1912 and joined the National Union of Women’s Suffrage Societies (NUWSS).  Another disaffected member was Emmeline’s estranged daughter, Sylvia, a pacifist like Ruth, with whom she worked in the NUWSS.

Formidable and sometimes aggressive, Ruth could be considered a contradiction.  Her pacifism struggled with her concern for her eldest son who fought in the war.  She was an active socialist who risked arrest and visited the poor in the roughest areas, yet at the same time (unlike Sylvia Pankhurst, who was embarrassed about her privileged upbringing) she never relinquished the advantages of upbringing and wealth: she enjoyed the fortune left to her (and Harold) by the Duke of Somerset when he died without male heirs.  She became pro-Communist, yet she and Frederick always kept servants and she was happy to stay with aristocratic friends like the Bowes Lyons. However, she was not averse to using her connections to achieve her goals for the improvement of women’s lives.

As well as the future Dukes of Portland, she and Frederick had two daughters. Despite a long and happy marriage until Frederick’s death in 1948, none of their children had successful personal lives. Ruth died in 1953, aged 86.  Her brother Harold married and had a successful army career but spent much time and money trying to prove (unsuccessfully) that his parents had actually married, an idea about which Ruth was scornful.

Ruth’s unorthodox life meant she was far from a dull worthy, while the physical legacy she left forms an important part of Britain’s social history.  She deserves recognition.

An anthology of interesting people, some known to me, others whom I’d have liked to  know, and a few I’m pleased simply to have discovered……

Tired of the tedious narcissism of the gym, where Neanderthals posed and flexed their muscles, tread-milling while watching soft-porn music streams, I decided to return to my roots and find a dance class.  I was raised on ballet, the core of all dance, followed by its cool sister, jazz, at which I have to say, if immodestly, I turned out to be not at all bad. This meant that when all the sporty but staggeringly uncool girls at my school were being chosen for the netball and hockey teams, I was the one selected – by our unusually right-on PE teacher – to show them how to cause a stir at their local disco.   “Ha!” I silently scoffed.  “Stuff that in the waistband of your just-a-bit-too-long-to-be-sexy games skirt!”

There being a dearth of dance classes in my locality for anyone over 30, I had to settle for a hybrid of jazz and “fitness”: great fun but the casualness of my classmates astonished me. They constantly stopped between routines to have a drink! In a class that was only one hour long! And not only in high summer, but on a bone-chilling winter’s night too, glugging their water desperately as though death through dehydration waits to claim those who fail to replace instantly a few lost drops of moisture: such a lack of stamina and so disruptive their visits to the loo in the middle of class.  It made me think fondly of Mrs French, my dance teacher from the age of three until young adulthood. She would never have tolerated such a lack of self control.

Mrs French was the epitome of old-school glamour, all upswept hair and elaborate makeup, a cigarette in an elegant holder never far from her glossy lips.  Probably from a tough background, she had worked hard over the years for her own studio and was accredited by the Royal Academy of Dance, despising the “tinpot” dance teachers who taught in draughty church halls. To maintain her excellent reputation, she expected high standards. Being allowed to have a drink during one of her classes was a Very Special Treat, permitted only when we were rehearsing for our annual show and had to come in all day on a Saturday.  Even then we could only indulge in the changing rooms, never in the studio: one’s need to eat and drink was to be kept firmly in its place.  She would never have tolerated the obesity of today. Fat people were beyond her comprehension. Excess body weight represented the ultimate lack of self-control so there were never any fat pupils in Mrs French’s classes. If one had turned up, she would have spoken severely to their mother and sent them away, suggesting – not unkindly but firmly – that they seek help, for elephants cannot tap dance or wear tutus.

Even asking to go to the lavatory was charged with tension and not encouraged, although visits were made only by the desperate.  The loos were the original wooden thunder-boxes, housed outside in a dimly-lit shed where spiders pirouetted and draughts danced in through the cracks.  The thought of peeling down one’s leotard in those conditions was enough to guarantee bladder control for life.

As for personal hygiene, pity the poor teenager who did not keep her bodily emissions under control. Deodorants were something Mrs French advocated with such zeal that she might have been an agent for the perfumed roll-on in her spare time. One occasion, when I was about twelve, made me break out in a sweat in sympathy with my fellow dancer whenever I thought about it. We were in the middle of a tricky ballet routine, all leaps and quick-fire turns across the room, when Mrs French suddenly clapped her hands loudly in a way that did not indicate appreciation, and shouted, “Girls, stop!” We braked to a halt and looked at her expectantly.  Her beautifully coiffured head with its champagne-coloured chignon was tilted back, her nostrils flared like a horse that has caught a scent on the wind.  And she had. She lowered her head and, with an expression of utter disdain, cast her eye over us, exhaling the words in a voice that was barely audible, yet had terrifying emphasis:

We sniffed our armpits surreptitiously but we knew who it was. One of the older girls, Mary, who had a big bust and a black birthmark on her leg, like the skin of an overripe banana.  She knew it was her, too.  She turned very red and went outside, and I think she cried.

For our ballet classes, Mrs French employed a pianist, Miss Rose, whose very name suggested fragrance and delicacy. She was, in fact, an ill-tempered crone whose mouth seemed to smile sweetly at us while her eyes narrowed and bored into ours resentfully.  Given half the chance she would drop us in it.  “I won’t begin to play yet, Mrs French,” she would whine ingratiatingly, taking great care with her vowels which were less Fonteyn, more Fulham, “because I can see Jane isn’t quite ready……” For a lack of attention was another unacceptable fault in the eyes of Mrs French. No talking. No giggling.  No fiddling with hair. No looking at the clock and for heaven’s sake NEVER yawn, lest you be accused of the eighth deadly sin of boredom.

But you could forgive Mrs French almost anything, for she was kindness itself when it mattered and a damn good teacher.  Above all, she was show biz.  To see her at our annual show, high-kicking across the  stage in a rousing version of Mame for the last number before the finale, in a gorgeous spangled gown and high-heeled silver sandals, was to love her and envy her.  Surrounded by her young men from the adult class whom we all fancied, she looked as though she could grind them to dust under her heel, her shoes making even her bunions look glamorous, acquired as they were from years of pounding the boards and kicking the derrières of those who didn’t try.

When I was sixteen she wanted me to become a professional dancer.  I asked her what would happen when I was too old to perform.  “Why darling,” she purred, “by then you’ll have married a millionaire.”  She would never have understood the gym.

Posted by dismorem | Filed under Uncategorized 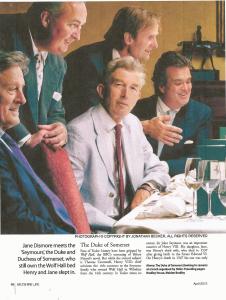 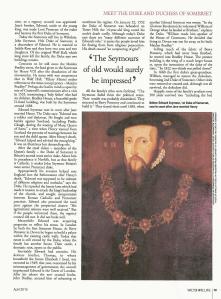 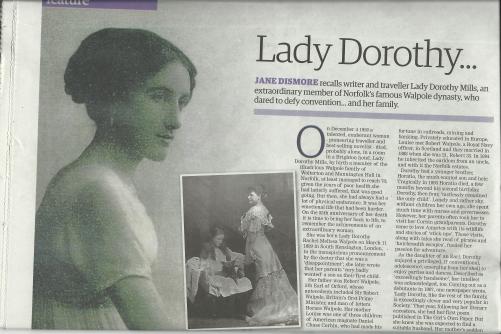 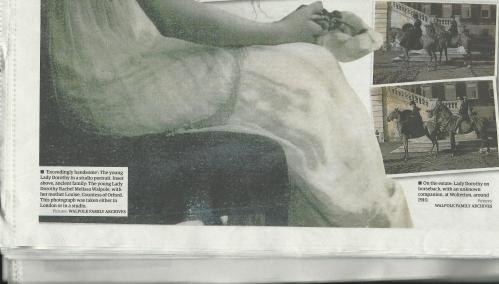 Pictured at top of page: